Gerry Visco is a photographer, performer, writer, and nightlife diva. She writes regularly for Interview Magazine and Hyperallergic art blog. She had a weekly column for New York Press from 2006 until 2011 when it was shut down. Gerry has a BA in Literature, an MFA in Writing, and an MS in Journalism from Columbia University. She’s writing a memoir about her colorful life as muse, fag hag, renegade, and rent girl, in the gritty glamorous world of New York City in the 70s and 80s.

Right now, Berlin-based Peaches is in New York City to screen her new film, Peaches Does Herself, and perform at (Le) Poisson Rouge. The film has been called an electro-rock opera and is all music, featuring  22 of Peaches' songs.
Interview Link to Story

Martha Stewart Wants You to Make It

Coming In with John Waters

At City Winery, we met John Waters at a private dinner composed of a small group nestled among large steel wine casks. Wearing a dapper white suit, he was kind enough to allow us to sit next to him, as long as we promised not to get any food stains on his jacket.
Interview Link to Story

Over a cup of cappuccino, we discussed Joseph Keckler's upcoming performance piece, I am an Opera, and his haunting brand-new music video,
Interview Link to Story

Reconnecting and Exploring the Love of Looking With Nan Goldin

Don’t you love attending a high profile art opening on a Friday night and instead of getting a nice big glass of vino, being handed a plastic cup of imported mineral water? Forget about TGIF.
Hyperallergic Link to Story

The Costume Institute at the Metropolitan Museum of Art has forgotten that clothes and fashion are not art. When you go to see the PUNK: Chaos to Couture exhibit, which opened on May 9 and runs unt...
Hyperallergic Link to Story

Iyengar Yoga for the crowd: character active, want to increase the flexibility of the body of people (especially the body hurt, who is recovering). Physical and psychological benefits: Los Angeles Institute of Yoga BKS Yi Yinjia Leslie Peters said: "Ai Yinjia yoga is characterized by emphasis on correct body posture, and emphasis on detail."
Link to Story

Queen of the Scene

Don't mistake Ladyfag for a man, she's the future of Downtown nightlife.
Link to Story

gerryvisco@gmail.com
Gerry Visco is a photographer, performer, writer, and nightlife diva. Her photographs have been exhibited at Munch Gallery, Bushwick Open Studios, Salon No. 15, Chelsea Eye Gallery, Envoy Enterprises Gallery, Artflux, Minneapolis Institute of Arts, Gallery U in Montclair, NJ and in Detroit, Michigan and appeared in New York Magazine, Interview, Hyperallergic, The Village Voice, The Daily News, Out Magazine, One (Bulgarian Art Journal) and Gawker. Her nightlife photographs will be featured in the forthcoming book for The Museum of Arts and Design by Jake Yuzna, The Fun: The Social Practice of Nightlife in NYC. The Village Voice named her Bravest Nightlife Photographer of 2010. She’s still alive, despite being thrown to the ground, spit and pissed on, and having her camera smashed.

Visco uses performance as a point of departure for her photography. A born party-animal and performer, Visco refuses to roll over and play dead; she prefers to roll around on the bathroom floor, or stretch out and get comfortable in the middle of a Citibank lobby. Her fabulous style and confrontational invasion of both public and personal space make her a formidable night-life and street photographer, an artist who is not afraid to see the city for what it is, and then recast it in her own image. Visco lives her art every day, and her life is a performance in itself. Her art is a real-time enactment of the never-ending struggle to survive and have fun in a city where the cost of living drives us all to work and behave like zombies. The photography came about while attending the School of Journalism School at Columbia where she loved taking photographs at events and on the street, allowing her to document the world around her and express herself.
Visco has performed in numerous films and live productions, such as "FCKNLZ on Broadway" at the Museum of Arts and Design, Pussy Faggot, Vandam, the R Bar, Dixon Place, Theater for the New City, Cameo Gallery, The Wild Project, the Creative Time Gala, Envoy Gallery, The Slipper Room, the Bowery Electric, Chantal’s House of Shame in Berlin, on television in "Oddities," assorted cool music videos like Sharon Needle’s “Call Me on the Ouija Board” and Ssion’s Luvv Bazaar, and in several full-length feature films, including Woody Allen’s “Stardust Memories," Abel Ferrara’s recent “4.44 Last Day on Earth,” and in the forthcoming "Hellaware." Visco currently writes for Interview Magazine and Hyperallergic. She’s written hundreds of articles that have appeared in publications including New York Press, Vice, and Out Magazine. Gerry holds a BA in Literature, an MFA in Writing, an MS in Journalism from Columbia University, and an AAS from FIT. She’s currently writing a memoir about her life as muse, fag hag, renegade, and rent girl, in the gritty glamorous world of New York City during the 1970s and 1980s. She has a day job, barely sleeps, and is illegally blonde at large on the Upper East Side, so watch out! 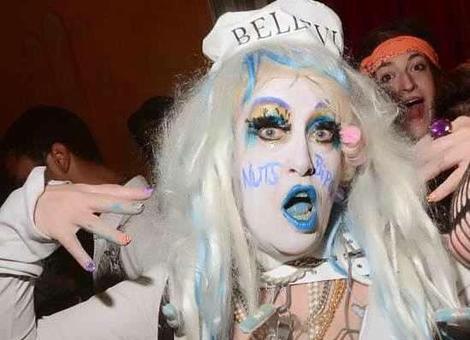